Archbishop baptises in the sea at Brid

The Archbishop of York, Stephen Cottrell, led a happy crowd from Emmanuel Church, Bridlington, at the town's South Beach early on Sunday morning where five people joined him in the sea to commit or re-commit their lives to Jesus Christ through the waters of baptism. 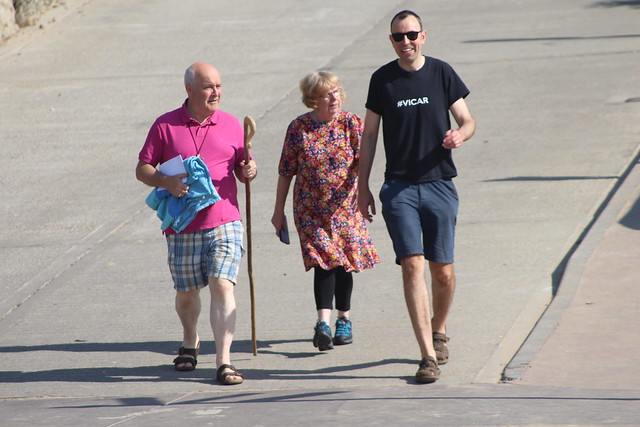 The tradition of baptism in running water goes back to the Bible stories of John the Baptist, Jesus and then his followers washed new believers in rivers or lakes as a sign of their new start, washed clean of past burdens and re-born through the love of God.

After drying off, the five candidates joined the Archbishop at Emmanuel Church's 11.00am service of Holy Communion where another candidate was baptised by the more-frequent method of water poured on the head, and two more people re-affirmed their own baptismal vows.

Archbishop Stephen confirmed four candidates; confirmation is a sacrament of belonging, a fresh anointing of the Holy Spirit for those who feel their Christian faith has reached a stage of maturity and permanence in their life.

Archbishop Stephen Cottrell said, “Making a public commitment to being a follower of Jesus is a huge step and a moment to celebrate and remember. And if you're at the seaside, where better to experience the washing away of past hurts and the re-birth than out in the waves? A fantastic way to mark a new beginning - Bridlington beach on a summer's morning!”

Baptism candidate Ryan Hartshorne, who made his decision to be baptised after taking part in Emmanuel Church's Alpha Course said, “Since I started coming to church a lot of good things - positive things - have happened in life, and I wanted to make a commitment for myself to the faith and the church.

“We've all done things in the past - made mistakes - and will probably continue to do so, but I wanted that fresh start, and to have that clarity of mind - my past's in my past, and it's all about the future!”

Curate of Emmanuel Church the Revd Rich Townend said, “This is such a wonderful day. There’s been a thousand reasons why these candidates shouldn’t have made it to the waters of baptism, but by the grace of God and their commitment to following him, we have made it!

“Each of them has an incredibly complex and personal story and the church has been their very own ‘ark of salvation’, giving them refuge and protection from the battles around them as they journey into new life with Christ.”