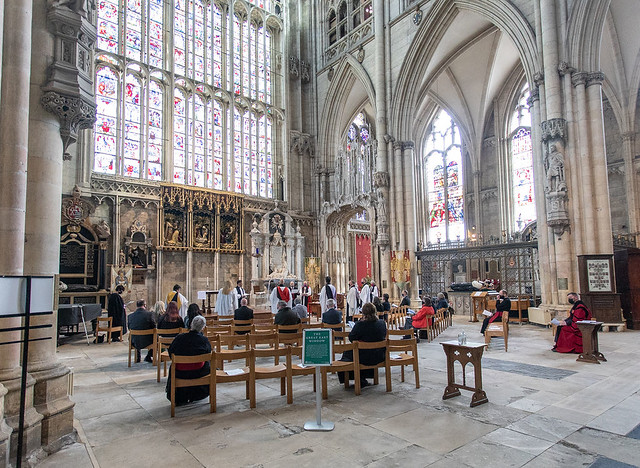 Eight new Honorary Canons will be collated, admitted and installed as members of the College of Canons of York Minster on Sunday 25th April.

The Installations will take place within a service of Choral Evensong and will be livestreamed. The Honorary Canons elect will be collated and admitted prior to being installed by The Archbishop of York, Stephen Cottrell. Reservations will not be required for the Evensong service but due to the Coronavirus restrictions, capacity will be strictly limited.

The Dean of York, the Right Revd Dr Jonathan Frost said members of the College of Canons act as ambassadors for the mission and work of York Minster and as  ‘critical friends’, bringing a wealth of experience and guidance.  Jonathan said: “The members of the College of Canons bring lively faith, rich experience and great wisdom to York Minster, the Cathedral Church of the Diocese of York. I very much look forward to welcoming them on Sunday and to the journeys and adventures we shall share together in the years to come”.

These honorary appointments are in addition to any posts the Canons Elect currently hold:

The Archdeacon of Cleveland, the Venerable Amanda Bloor, will also be admitted and installed on the same occasion, following her collation last year.

The Archbishop of York said: “I pray that the gifts, wisdom and, above all, Christ-centredness that these new Canons bring to the life of the Cathedral and the Diocese, will be a huge blessing to our life together, and that the places where they serve will be enriched in return. May God fill them with joy to match the patience they have shown in waiting so long for their collation, admission and installation!”

The Revd Nick Bird - Canon and Prebendary of Fenton
Nick was ordained in 2005 and served as Curate in Thirsk until 2009. Since then he has served in what is now the Benefice of Rural East York, comprising Dunnington, Stockton-on-the-Forest, Holtby and Warthill, initially as Priest in Charge and now as Rector. He is a member of the Diocesan Vocations Team and since 2016 has been Area Dean of Derwent Deanery.

The Revd Dominic Black - Canon and Prebendary of Weighton
Dominic was ordained in 1998 and served as Curate at St Michael and All Angels, Orchard Park, Hull until 2004. He was Vicar of Holy Trinity, North Ormesby, Middlesbrough from 2004 to 2020 when he moved become Priest-in-Charge of Hull Minster, and will become Vicar there in 2021. He was also Area Dean of Middlesbrough from 2011 to 2020.

Mrs Ros Brewer to be Canon - Prebendary of Ulleskelf
Ros, a former nurse, is Lay Dean of Scarborough, a Lay Member of the Church of England’s General Synod representing the Diocese of York and consequently a Member of Diocesan Synod, the Diocesan Pastoral and Property Committees, the Diocesan Board of Finance and the Vacancy-in-See Committee; a member of the Deaneries Development Group and more.

The Revd Richard Carew - Canon and Prebendary of Knaresborough
Richard was ordained in 2005 and served as Curate at Beverley Minster. From 2010 to 2018 he was Domestic Chaplain to Archbishop of York Dr John Sentamu, and is now Vicar of St Edward the Confessor, Dringhouses, York.

The Revd Glyn Holland - Canon and Prebendary of Ampleforth
Fr Glyn was ordained in 1985 and served as Curate at St Chad and St Martin, Wakefield until 1989. He was Vicar of St Andrew, Ferrybridge, West Yorkshire, and also Hospice/Hospital Chaplain at Pontefract General Infirmary from 1989 to 1996. Since 1996 he has been Vicar of All Saints, Middlesbrough, where in 2008 he was voted 'Citizen of the Year'.

The Revd Anne Richards - Canon and Prebendary of North Newbald
Anne was ordained in 2010 following some years as a Christian youth worker, and served as non-stipendiary minister at St Michael and All Angels, Orchard Park, Hull, until 2015. She has been Chaplain to Archbishop Sentamu Academy, Hull, since 2014.

The Revd Tim Robinson - Canon and Prebendary of Langtoft
Tim was ordained in 1991 and served as Curate at St Mary, West Acklam, Middlesbrough until 1995. He was Priest-in-Charge and then Vicar of Holy Trinity, North Ormesby, Middlesbrough from 1995 to 1999. He worked in teaching and theological education from 2000 to 2009. In 2010 he became Priest-in-Charge and later incumbent of the Upper Ryedale group and of Helmsley, and has additionally been Area Dean of Northern Ryedale Deanery since 2011.

The Ven Amanda Bloor - Archdeacon of Cleveland
Amanda was ordained in 2004 and served as Chaplain and Diocesan Advisor in Women’s Ministry to the Bishop of Oxford and subsequently as Area Director of Ordinands for Berkshire, before moving to the Isle of Wight in 2015 to serve as Priest in Charge of Holy Trinity Bembridge and Assistant Diocesan Director of Ordinands in the Diocese of Portsmouth. Amanda undertook Doctoral research in Clergy Wellbeing and has a keen interest in the flourishing of those engaged in ministry. She was appointed Archdeacon of Cleveland in 2020 and is additionally the Warden of Readers for the Diocese of York.