Archbishop ordains deacons to serve in the Diocese of York 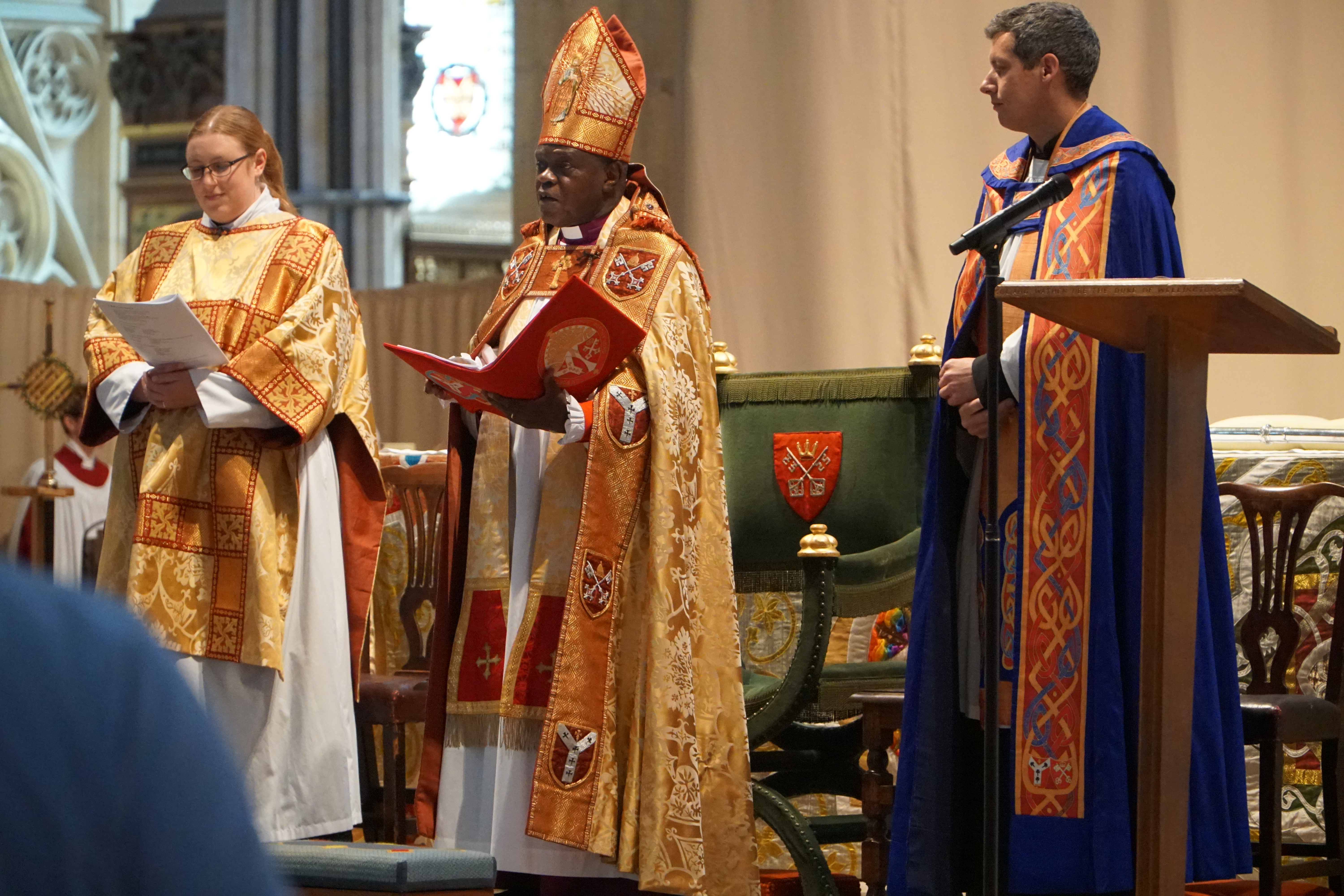 The Archbishop of York, Dr John Sentamu, will ordain new deacons to serve in the Diocese of York during a service in York Minster beginning at 10.00am on Sunday 30th June 2019.

As Deacons they will assist in leading worship and undertake work in the local community while serving as Assistant Curate (an assistant minister, continuing their training in service) in a parish in the Diocese of York, which is the Church of England from the Humber to the Tees and from the A1 to the Yorkshire Coast.

They include teachers, a Professor of Computer Science at York University, a former lay selector of Church of England clergy, a nurse, a painter of botanical illustrations and an inner-city missioner; some will serve full-time while others will continue to support themselves through other means.

Dr John Sentamu said, “Thanks be to God that he calls his friends from all walks of life to serve him and his people. Today we will surround them in love and prayer as they say YES to that call, and we pray too for all the parishes and the people they will serve. ”

Anne Almond has trained at St Hild College in Mirfield and will serve as Curate at St Nicholas, Beverley.
Her early career was as a nursing sister, then studying Health and Social Care before becoming a medical Practice Manager.
“My faith in God was tested to its limit after the death of our little girl Kathryn, who died when she was five and half.  I spent some time questioning just what kind of God could allow such pain in anyone’s life.  Eventually I found a peace through the persistent and enveloping love of God.  It is that struggle that is leading my faith journey towards ordination on 30th June.
“Training has been a challenging time but the family atmosphere nourishes faith and life. Stress busting, for me, is time with family in Portugal watching the sunset with a glass of Sangria in hand.
“My hope is for joy in serving my church and local community with commitment and deep faith.”

Nigel Benson has been a Reader (a licensed lay minister) at St Mary’s Haxby and St Nicholas Wigginton (York) since 2013, brings experiences as a soldier, a police officer, a civil servant, a father and grandfather, and serves as a chaplain with 110 (City of York) Squadron RAF Air Cadets and at York Hospital.
His journey towards ordination began in about 2002 soon after he became a member of the congregation at St Mary’s, with encouragement from former Vicar Martyn Green; Nigel studied Theology and Ministry at York St John and served as Churchwarden at St Mary’s for five years.
“Throughout all that time God was still tugging at me. So here I am, having completed training at St Hild College in Mirfield, which has been wonderful.”

Bridget Gillespie has been training part-time for two years with St Hild College and will serve as Curate in Kirkbymoorside. As a self-supporting minister she will continue her work of teaching and painting Botanical Illustrations in addition to part-time contribution to local dementia care.
Becoming a Churchwarden in 2008, she went on to train as a Recognised Parish Assistant which in turn inspired her to study the Old and New Testaments with York School of Ministry. Gradually, internal convictions coincided with friends and strangers prompting Bridget to explore ordination.
“My calling probably began around the age of 11 but all I knew about women in ministry back then was the nuns from ‘The Sound of Music’”, says Bridget.
"I am looking forward to my curacy in my home parish,” she adds.

Tim Kelly , originally from Derby, moved to York in 1994 to start his research career, working with industry on safety-critical computer systems (computers controlling trains and driving cars!). Married to Charlotte with three boys, Tim has enjoyed his career as an academic and Professor at the University of York, but after training with St Hild College he will now be a full-time curate at Beverley Minster (and associated churches) with the Revd Jonathan Baker.
Tim became a committed Christian aged nine, first heard a whisper of God's call to ordination as a teenager, and it was during his time in voluntary youth work that he felt God call him to serve as an ordained minister.
“I’m excited to be part of the next steps in growing and shaping the Church of England: ‘For the sake of the world, burn like a fire in me.’”

Katharine McBride was recommended for ordination training during two years working as a lay minister at St Paul’s Church in Holgate, York, coordinating events, leading worship and preaching. She has loved being a full time Contextual student at St Hild College, studying theology while ministering in the parish of Rural Ainsty to the West of York.
Katharine became a Christian at the age of 11 after a holiday club, and was fortunate to be in a church which encouraged her in discipleship and in leading music and children’s work. After University, she was a secondary school English teacher, working at Fulford School, and after 11 years I realised that she was being called to Christian ministry.
“I want to see the church grow in faith, in numbers and across generations, so I’m really looking forward to being curate at St Mary’s, Strensall, learning more and being creative in sharing my faith.”

Mel Meesam realised as a teenager that God was leading her towards ordination, prompted by the decision that women could be ordained in the Church of England, and she began her exploration in her twenties. She will serve as Assistant Curate at St Cuthbert’s, Hull.
She studied theology at St Andrew's University and has enjoyed training for ordination at St Hild College, including placements in a parish and at Archbishop Sentamu Acadamy in Hull.
"I am on the brink of being ordained as a self-supporting minister and am excited to see how ordained ministry develops alongside working as a social worker.
"It has been a challenge combining training with a full-time job.
"As somebody who lives with disability, I have been stretched and challenged by the research I have done into theology and disability as part of my training."

Jo Parker was brought up in a Christian home in the fishing town of Filey; a working-class fisherman’s daughter and proud of it. She first felt called to ministry at the age of seven but rebelled as a teen. She will serve as Assistant Curate at Holy Nativity, Eastfield (Scarborough).
“This sense of call has never gone away and amazingly God has opened every door to enable me to train for ordination.”
Jo has been married for 22 years to Rob, an itinerant worship leader, and with four kids (Dan, Aran, Ruth and Anna).
“My family have been such an incredible support and we do ministry together; we come as a package.”
Jo trained at St Hild College in Mirfield and at Emmanuel Church, Bridlington on a full time ‘Contextual Pathway’ – “A fantastic way of learning on the job.”
“I’m really excited to begin ministry; privileged that God would choose me just the way I am; just a working-class lass from Yorkshire; what you see is what you get!”

Margaret Sentamu’s roots are in Uganda although she and her husband have lived and ministered in this country for the best part of their adult lives.
Margaret’s faith and vocational journey have been formed through a career that includes regulating solicitors and accountants, mental health, Traidcraft and previously helping to select future clergy for the Church of England. She was therefore surprised with joy when the national Church’s discernment process affirmed her calling to ordained ministry.
Joining in the joyful celebrations will be family and friends here and the wider family in Uganda. In view of her extensive experience and knowledge of the Church, her training will take place at Cranmer Hall after ordination and as she continues to learn on the job as Curate at St Chad’s, York.
“My passion and desire is to see lives transformed and to be part of building God’s kingdom here on earth as it is in heaven,” she says.

Maxine Waller currently works as an activities coordinator with the elderly alongside her work as a dance teacher, which has taken her from family roots in Bridlington, where her Great Grandfather was a Methodist Lay Preacher, to as far afield as the Persian Gulf and Crete.
“Having experienced a broad variety of traditions in the Church of England, my calling to ministry has grown with a gradual ‘warming of the heart’.  I have worked to develop new opportunities for mission through the arts and dance, have a passion to support and care for those on the margins and hope to encourage those beyond the Church to find ways into faith and a fellowship with Jesus”.
Maxine has trained for ordination at St Hild College and will serve as Assistant Curate at the Priory Church of St Mary, Bridlington.

Mark Walley was blessed with Christian parents who prayed for him and taught him the bible; with ups and downs, he grew up knowing God’s love for him. He worked in inner London doing mission among teenagers for a Christian community centre. Ten years and an unexpected career change later, Mark was working for a charity seeking to get the church engaged in fostering and adoption.
“I really loved the job but at the prompting of church and friends I felt the call to explore ordination. The further I explored it the more I realised that this was what God was calling me to do.”
Mark stayed in London to train at Oak Hill College and will move with his wife and two children to serve at St Barnabas, Linthorpe, Middlesbrough.
“While training has been a great blessing, I’m excited to put into practice what God has been teaching me.”

Laura Wild began to discern a call to ordained ministry whilst a Lay Chaplain in a Church of England School: “God was nudging me to consider the needs of the world beyond the school gates!”
She trained for ministry through a contextual (parish based) pathway within St Hild College and will serve as Curate at St Mary’s, Nunthorpe.
Laura is married to English Teacher John, with two energetic and engaging boys, Matthew (7) and Benjamin (5), and hence they are surrounded at home by bookcases, although at weekends they might have a cycle about together or a scramble up a hillside.
“I'm absolutely delighted to serve a curacy not far from my childhood home in – very much my home town – Middlesbrough.  I pray I may see what God is already bringing about there.”

For further information contact Martin Sheppard on 07377 356621 or [email protected].

Group photos will be available after the service; photos of individual candidates by prior arrangement with Martin Sheppard.