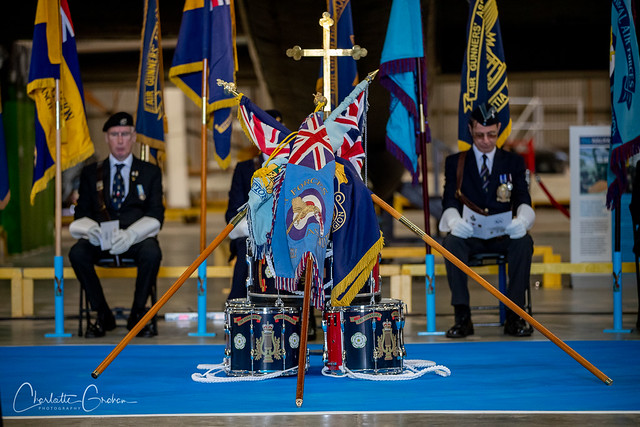 The annual Drumhead Commemoration Service to honour the airmen and women of all allied nations who have served their countries in times of conflict will take place once again this year on Sunday 1st September at the Yorkshire Air Museum & Allied Air Forces Memorial.

The ceremony will feature the customary Parade, lead by the Yorkshire Military Marching Band and Corps of Drums, with the National Standards of the Royal Air Force Association, Royal British Legion and Royal Observer Corps Association, along with many regional service association Standards and members and Air Training Corps Cadets also taking part.

The Archbishop of York, Dr. John Sentamu, is attending the service in his capacity as a Vice President of the Museum and Memorial, and he comments: “It is an honour to attend the 2019 Allied Air Forces Memorial Day, which this year marks the 75th anniversary of the D Day landings - an event that reminds us of the co-operation of Allied Air Forces and many people, working together then, since and now to bring peace to war torn places across the world. My prayer is that we never stop in our efforts to bring peace and the rule of the Kingdom of God to our world.”

These humbling words are indeed at the heart and essence of what the ceremony is all about, as ex-servicemen and women come together to remember and honour their fallen comrades who paid the ultimate sacrifice in the cause of peace and freedom, and, indeed on those that have gone before them. It is also an opportunity to give thanks for those who serve today and in the future.

Museum spokesman, Ian Richardson, said: “We are delighted that the Archbishop of York is joining us this year, and indeed, we have many other prominent guests attending the ceremony. The Chief of the Air Staff will be formally represented by Air Commodore Richard Davies CBE, Commandant of the Air Warfare Centre, RAF Waddington. The presence of the Lord Lieutenant of East Yorkshire, the Hon. Dame Susan Cunliffe-Lister and the Deputy Lord Lieutenant of North Yorkshire, William Worsley, will reflect the service of so many people from airfields across Yorkshire during WWII.”

Senior Air Force and Diplomatic representation has been received from France; The Netherlands; Canada; Australia; New Zealand; U.S.A. and also, for the first time, from both Poland and the Czech Republic, which is absolutely fantastic.

Support has been given by the Battle of Britain Memorial Flight, who have allocated a flypast by the WWII Douglas Dakota, an aircraft synonymous with the D-Day Invasion and in keeping with the 75th Anniversary theme of the Service.

The Museum would like to encourage a good number of visitors to enjoy a visit and join our congregation and so a special admission rate of £7 Adults and £4 Children (5-15) is being offered on Sunday 1st September.