The strain antibiotic resistance is placing on our healthcare service is to be discussed at a November tea party in Helmsley.

The Archbishop of York Dr John Sentamu is Patron of Antibiotic Research UK (ANTRUK), the world’s only charity dedicated to beating the superbugs. The Archbishop will open the event at Helmsley Art Centre on Sunday 17 November.  Professor Colin Garner, founder of ANTRUK, will speak at the event along with Dr Neil Todd, Consultant Microbiologist /Clinical Director at York Teaching Hospital NHS Foundation Trust.

Heralded as the miracle medication of the 20th century, antibiotics have saved millions of lives. But while bacteria in our bodies has changed and become more antibiotic resistant, new medications haven't been developed. That means once treatable conditions such as pneumonia and urinary tract infections are proving more difficult to cure and experts are warning that 10 million people could perish from antibiotic resistant superbugs by 2050.

Professor Colin Garner said: “This dire health emergency has been caused by the over-use and misuse of antibiotics and has been exacerbated by inaction from the pharmaceutical industry and government. Our already creaking health service is going to bear the brunt of this and we could be facing an age where you die of an infected scratch and routine hospital operations are cancelled for fear of infection.”

Now boasting a UK-wide Patient Support Scheme caring for superbug sufferers and their families, ANTRUK has grown from humble roots in York to being a national player and influencer on antibiotic resistance. Its flagship campaign, the Great British Tea Party, has seen community groups, universities, medical practices and businesses join together over tea and a slice of cake, raise funds and talk all about antibiotic resistance.

The Helmsley event will be one of the highlights of this year's drive – to get involved, visit https://www.antibioticresearch.org.uk/support-us/great-british-tea-party/

The “How antibiotic resistance is impacting modern medicine” talk takes place at:

The talks will be followed by a Great British Tea party and networking opportunity. Tickets can be purchased by clicking on this link - http://www.helmsleyarts.co.uk/whats-on/how-antibiotic-resistance-is-impacting-modern-medicine-tackling-the-superbug-menace 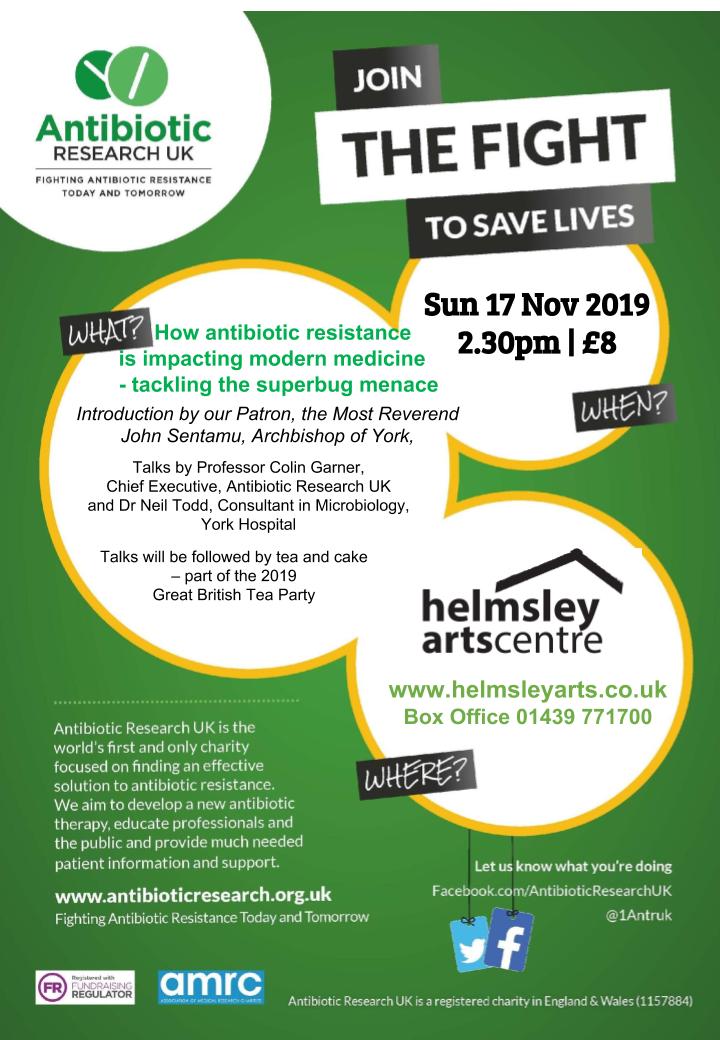 Antibiotic resistance is where the bacteria that cause infections become resistant to antibiotics. It is a global catastrophe that threatens the lives of millions of people around the world if we don’t act now. We are often exposed to bacteria that can be harmful to our health. This could be during medical procedures, such as dental work to organ transplantation, cancer therapy to hip or knee replacements. It can also happen when we injure ourselves, even through a simple scratch, or are exposed to a contaminated environment. As bacteria become increasingly resistant to the effects of antibiotics so the number of deaths will increase because of this. Resistance is a global health disaster that is already killing 700,000 people a year, and it is predicted to cause 10 million deaths per year by 2050 if the current situation is not improved.