His Majesty King Charles III and Her Majesty The Queen Consort, will visit York Minster on Wednesday 9 November for the unveiling and blessing of the cathedral’s new statue of Her Late Majesty, Queen Elizabeth II. 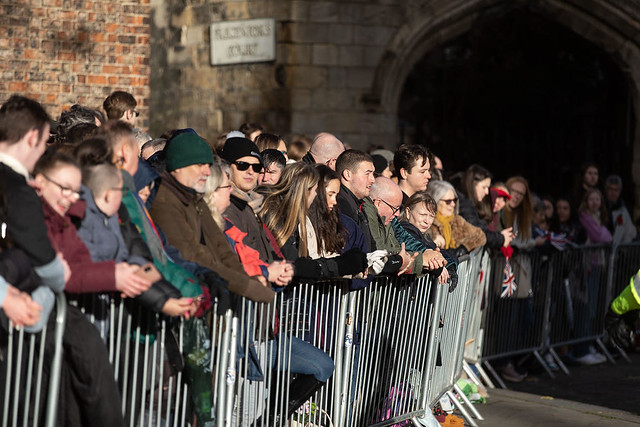 After a short service of prayer, The King and The Queen Consort will meet people from the Minster Community, the city of York and the wider region doing outstanding work in their communities and making a difference to the lives of local people.

At a new exhibition, The King will meet York Minster stonemason Richard Bossons, the designer and carver of the statue of the late Queen, and his assistant Rita Dawe. The exhibition documents the creation of the statue from concept through to finished work of art. Commissioned by the Chapter of York, the cathedral’s governing body, the statue honours the life of service and dedication of Her Late Majesty the Queen.

The King will then meet children and young people from the Minster Community and talk to staff and volunteers who met the late Queen when she visited the Minster in 2012 to distribute the Royal Maundy.

The Queen Consort will meet representatives from the military and emergency services in the city and region.  Her Majesty will be introduced to two pupils from Husthwaite Church of England Primary School, Husthwaite Village, North Yorkshire.  The children won a competition to design a stone carving to celebrate the Platinum Jubilee. Their designs have been transformed into stone pieces carved by the Minster’s stonemasons.

Representatives from local social action groups, refugee organisations and charities working hard to support some of the most vulnerable and disadvantaged communities in York and the region, will meet The Queen Consort.

The King and The Queen Consort will sign the Distinguished Visitors’ Book before leaving the Minster through the Great West Door for the unveiling and blessing of the statue.

Archbishop Stephen said: “The presence of The King and The Queen Consort at York Minster, in the heart of the city of York, for this wonderful and unique occasion is an immensely poignant moment. But this is also a joyful day as we honour the long life and service of Her Late Majesty Queen Elizabeth to her people, her nation and the Commonwealth.”

Lord Mayor of York, Councillor David Carr said: “That His Majesty King Charles III has chosen to visit this historic city so early in his reign is a great honour for York. We hope that this day, which I am certain will combine great joy at his presence and proud reflection on the great service and legacy of his late mother, Queen Elizabeth II, will be the first of many visits by him to this great city. My thanks and congratulations go to the whole team at York Minster for the work they have done to make this historic occasion possible.”