The Archbishop of York has presented slave vases and anti-slavery medallions. Some background on this follows...

John Mohin -  Director of Wedgwood - made the priceless Slave Vases available for the Archbishop to decide on how they will be given to represent the anti-slavery campaign during the year marking the abolition.

The Archbishop of York presented two slave vases to the speakers of the House of Commons and House of Lords. 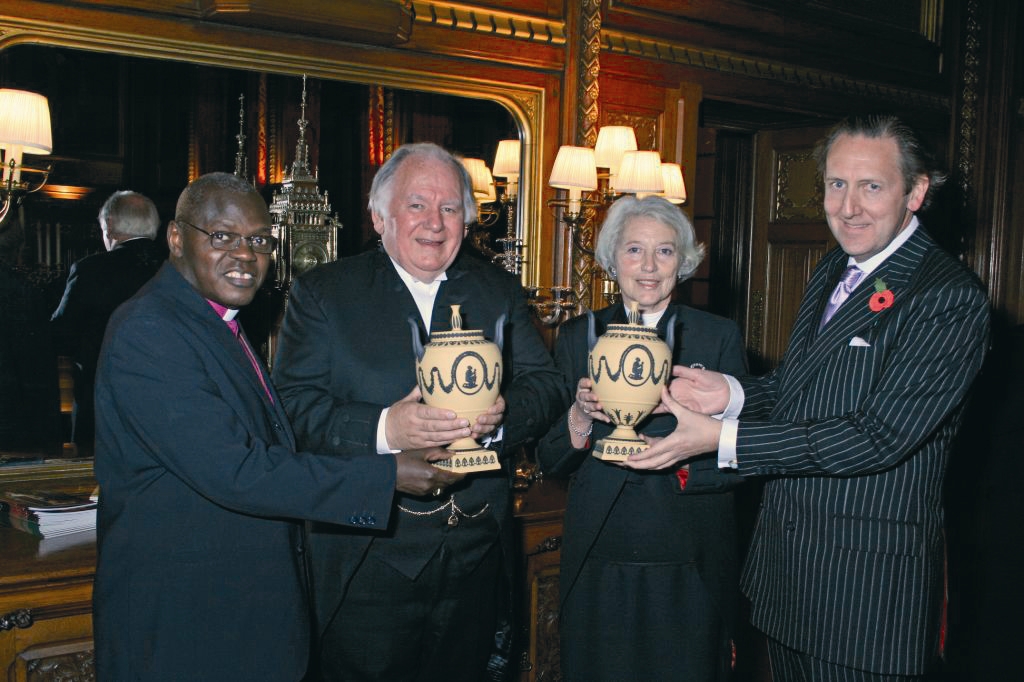 The Slave Vase has its origins in the eighteenth century neo-classical revival that placed Josiah Wedgwood's nascent business at the very heart of Georgian fashion.   The powerful symbol of the kneeling slave in chains surrounded by the caption  'Am I not a Man and a Brother' has been applied to Wedgwood's Vase 1316 shape  to create a truly exceptional prestige piece.  This vase will not be offered for commercial sale.

The first anti-slavery medallion, was made in 1787 , by Josiah Wedgwood at his own cost.  He was the top designer of his day creating a medallion with a black figure in chains and the line 'Am I not a man and a brother?' the motto of Britain's Committee to Abolish the Slave Trade .

Radically for its time, the slave was pictured as a noble, dignified person demanding his shackles be broken, not as someone less than human.

The medallion became a must have and Wedgwood, a passionate anti-slavery campaigner and friend of William Wilberforce, reproduced the design on fashionable jasperware medallions and seals, sending them throughout Europe, America and Great Britain to popularise the anti slavery cause. Thomas Clarkson said they had the same impact as 'the best written tract' against slavery, while Ben Franklin, the President of the Abolition Society in America, said they brought 'honour to the oppressed.'

The inclusion of the powerful medallion design on the Vase continues Josiah Wedgwood's legacy into current times. The icon of the anti slavery movement generally for the last two centuries, it is still as poignant and as powerful today as it ever was in promoting the cause against oppression based on race, colour or creed."

Dr Sentamu has also placed one of the medallions in a time capsule when opening the David Young Academy, a new faith school in Leeds and opening a new college at Blackburn. He also presented a medallion to the Lord Chancellor Jack Straw in recognition of his setting up the Stephen Lawrence Judicial Inquiry.  Commemorating the bicentenary in 2007 in York Minster,  Archbishop Sentamu also presented medallions to both Hugh Bailey MP  (lab) and William Hague MP (con), both Yorkshire MPs who attended this service.