The Archbishop of York, The Most Rev. and Rt Hon. Stephen Cottrell, has completed a joyous long weekend of mission and ministry in Lancashire, visiting many parts of the County across three days.

The Archbishop’s journey across the Diocese took him to Burnley, Whalley, Blackburn, Lancaster and the Fylde Coast, including Blackpool Pleasure Beach Globe Arena for an evangelistic mission evening on Saturday night. 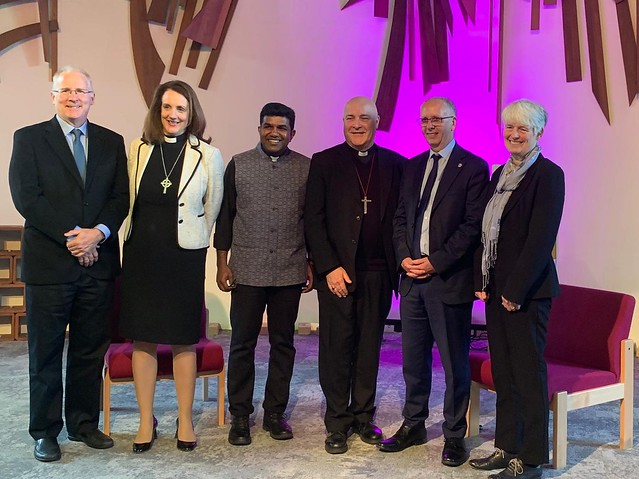 Before the weekend, Diocesan Bishop Rt Rev. Julian Henderson, the Bishop of Blackburn, was anticipating a ‘joyous and exciting’ visit … and so it proved to be.

Archbishop Stephen said: “I had a fantastic weekend in Lancashire – there is much to celebrate and give thanks for. Thank you to everyone involved. My prayer is that we are confident in sharing our faith with others so that more may now the love of God and enter into a relationship with him.”

•    Across the weekend media interest in the visit was high with the visit featuring on BBC Radio Lancashire multiple times; That’s Lancashire TV and many local newspapers across the region.
•    Meanwhile the Diocese’s own social media channels were very active throughout the weekend using #celebratelancs and many pictures plus a ‘video diary’ with the Archbishop as he travelled across the county; together with videos recorded with many other participants including Bishop Julian himself; Rt Rev. Dr Jill Duff, Bishop of Lancaster and Rt Rev. Philip North, Bishop of Burnley.
•    You can catch up with all this social media coverage, including the video diaries, on Twitter @cofelancs and on Facebook/BlackburnDiocese and all of it will appear soon in collated form on the Diocesan website news pages.
•    In addition to all the above, the main parts of the mission evening in Blackpool have been edited together for a video which is now available on the Diocesan YouTube channel.

The Archbishop started his journey at Lancaster University, accompanied by Bishop Jill where he met with senior lecturer, Dr Anderson Jeremiah, at the Politics, Philosophy and Religion Department to discuss racial justice with students from local schools.

Bishop Jill said: “Our prayer was that Archbishop Stephen’s visit would help our growing partnership with Lancaster University. During the visit we gathered together schoolchildren from across Lancaster to look at issues of racial justice and the Gospel. We also had some encouraging conversations with senior representatives of the University.”

Archbishop Stephen then moved on to Burnley where his first stop was Burnley College and he mingled with civic, commercial and business leaders from the town for discussions over lunch. They included the Council’s Chief Executive, Mick Cartledge and the Mayor of Burnley, Councillor Cosima Towneley.

Speaking just before the Archbishop arrived, Bishop Philip said: “Nearly 6000 students study at Burnley College for a huge variety of courses. It’s a really energetic place at the heart of a really energetic town and I’m really excited the Archbishop is coming to Burnley; to find out more about the good things that are going on in education and commerce and to meet people of all ages, faiths and backgrounds.”

Later, Archbishop Stephen met with students from the college who peppered him with a variety of questions about his journey to becoming an archbishop and his personal faith.

The Archbishop commented: “Although I’ve met some great grown-ups and members of staff I think what I’ve enjoyed so far in my visit to the County is talking to the young people – including being quizzed on life and matters of faith and hope! Really inspiring.”

He then moved on to the Ghausia Mosque in Burnley where he was greeted by community leaders, including the Leader of Burnley Council, Councillor Afrasiab Anwar. After a warm welcome to the mosque, a fascinating inter-faith discussion was led by Andy Pratt, Deputy Police and Crime Commissioner for Lancashire and Bishop’s Adviser on Inter-Faith Matters.

Archbishop Stephen said: “It was a fabulous meeting. We have received wonderful hospitality and importantly great conversations about where we can build bridges and friendships together and work for the common good.”

Councillor Anwar added: “It’s been a pleasure to welcome the Archbishop to Burnley and to this mosque as Leader of the Council but also as Chair of the inter-faith organisation ‘Building Bridges in Burnley’ – a role I’m passionate about. Building understanding and bringing communities together to learn more about one another helps to reveal all the things we have in common and allows for honest conversations.”

On his first evening in Lancashire it was on to Whalley Abbey, where the new Diocesan Centre for Christian Discipleship and Prayer is based, run by Director, Rev. Adam Thomas.
At the Abbey on Friday night there was a wonderful open-air service attended by several hundred people from parishes across the Diocese and led by the Archbishop; who also blessed the Abbey site and the work of the new Centre.

People came from far and wide, including Blackpool, Lancaster, Leyland and many other towns and villages around the County. Music was provided by the Blackburn Cathedral Youth Choir; Blackburn Diocese Asian Christian Fellowship Choir and St Thomas’ Lancaster worship group.

Immediately preceding the service, members of the Abbey Steering Group joined Archbishop Stephen for a prayer walk in the grounds led by the Archdeacon of Blackburn, The Venerable Mark Ireland and Rev. Adam Thomas.

Over dinner the Archbishop also heard about the incredible ongoing work to grow our churches which is happening now all over the County as part of our ongoing ‘Vision 2026 Healthy Churches Transforming Communities’; in a presentation given by Carolyn Barton, the Diocesan Director of Vision Delivery.

At Whalley, the Archbishop said: “The Abbey has always been a wonderful place but it’s so inspiring to see what has happened in the past year or so; with new life being breathed into the place, new management and new ambition.”

•    Visit the Abbey website for more information about the Centre.

Day 2, The Fylde Coast including Blackpool

On Saturday the Archbishop travelled to the Fylde Coast on a beautiful sunny day, that was perfect for many of the outdoor events planned, to see the work of churches in the area and to actively participate in a number of prayer, mission and ministry activities.

Later, the Archbishop joined the Resource Church Leader of Blackpool Church (St John’s in Blackpool town centre) Andy Dykes; Bishop Jill and the Archdeacon of Lancaster, The Venerable David Picken plus many members of the Blackpool Church to head out into the streets and nearby shops and restaurants and offer prayer for any reason t anyone who wanted prayer … and many did.

Commenting later, the Archbishop said: “It’s been great to meet so many people today. There has been an amazing transformation at Freedom Church for example, and it was also wonderful to be with Licensed Lay ministers and Authorised Lay Ministers from across the County to talk about prayer.
Together we puzzled out ‘what is prayer’ and ‘how do we pray’. We came to the conclusion that the prayer Jesus teaches us gives us everything we need to know about how we pray and also – the challenge – how we live.

“It was also great to pray in the streets of Blackpool itself later in the day. Everything we have been given in the church building has been given to us to be lived out on the streets – lived and also shared. The light of Christ shines in us.”

Then it was on to the Pleasure Beach Globe Arena for the highlight of the three days – a mission event attended by people from the north, south, east and west of the County.

They heard great music from a worship group made up of people from a number of churches across the Diocese; several moving testimonies and finally a powerful message calling people to Christ from the Archbishop himself.

Bishop Julian said: “It’s exciting to be here at the Pleasure Beach and to be able to explain something of the story of the Christian faith to those who may not know it or heard it before.”

Key excerpts from this mission event can be viewed in this special video on our YouTube channel here.

Archbishop Stephen told the story of his own journey to faith and in particular a sermon he heard one day where he felt the preacher was speaking directly to him, directly from God.

The Archbishop said: “I remember the challenge of his words, that this God was real. And not only was this God real but I only had one life and this life wasn’t a dress rehearsal for the real thing; this was the life that I had been given and what was I going to do with my life? I became a follower of Jesus.”

On the third and final day of his visit, the Archbishop led a service at Blackburn Cathedral which celebrated the 900th anniversaries of three East Lancashire churches. Delegations from St Bartholomew, Colne; St Mary Magdalene, Clitheroe and St Peter, Burnley turned out in force on the special day. You can watch a full recording of the livestream on the Cathedral YouTube channel. You can find the link to the channel via the Cathedral website homepage.

Archbishop Stephen commented: “That’s 2700 years of Christian witness and service from those three churches to their local communities and it reminds us of the joyful responsibilities we carry and continue to carry into the future, sharing what we have received.”

Reflecting on the whole visit after the service Bishop Julian, who is retiring in the summer, said: “As I look back over the three days I have lots of gratitude and give thanks to God. It gave the Archbishop the chance to engage with so many aspects of Diocesan life and has given him a real feel of what is going on the Diocese.

"This is also useful preparation for him as the Diocese goes into a vacancy for the role of Bishop of Blackburn; for the kind of person the Diocese needs to find for taking over my role when I step aside. And I have invited the Archbishop to continue to pray for us in the days that lie ahead.”

Archbishop Stephen summed up his visit by saying: “I’m hugely grateful for the time I’ve spent here in the Diocese. I do want to pay tribute to Bishop Julian in the last couple of months of his ministry here. He has been such a steadfast, faithful and creative presence; focusing the church on what really matters, which is to live and share the Gospel with others.

“I’ve met lots of great people, I’ve received lots of wonderful hospitality and seen great things and I want to assure the Diocese of my love, support and my prayers. I come to you as a fellow pilgrim. Together we are walking the way of Christ and together we do need to share that with others. It’s what our world needs. Thankyou and may God richly bless you.”