“Early on the first day of the week, while it was still dark, Mary Magdalene came to the tomb and saw that the stone had been removed.”
-    John 20. 1

This year I’ve had lots of conversations which have begun: ‘Oh, Easter is quite early this year.’

It is. Today is the 4th of April. Not quite the earliest Easter can be.  That is the 22nd of March. The last time Easter fell on that day was 1818, and it won’t happen again until 2285, a 467 year wait. So that very short break between Christmas and Lent shouldn’t trouble the Minster for a while.

Easter did fall on the 23rd of March in 2008 and the 27th of March in 2016 which also meant that Good Friday fell on the 25th of March - the feast of the Annunciation - also a very rare calendar coincidence and something that has fascinated poets and theologians down through the centuries but won’t happen again till 2157. Precentors can heave a sigh of liturgical relief.

I won’t try to dazzle you with the complicated calculations that produce the date of Easter, but as you probably know it is all to do with what is known as the Paschal full moon, Easter being the first Sunday after it.

However, as you may also know the Church itself can’t agree. The Western Church does one set of calculations. The Eastern Church another. Sometimes they concur. The next time will be 2025. But this year, in the east, Easter isn’t till the 2nd of May. Which is a whole week later than our very latest date, which is the 25th of April. And just so you know, this cycle of Easter dates repeats itself every 5,700,000 years. Exactly. And the most common date within the cycle is the 19th of April.

So, its official, this year – the 4th of April – is two weeks earlier than the average.

And here I note that in today’s gospel reading the very first word is ‘early.’

There is a sense in which, whatever the date, Easter is always early. It is always taking us by surprise. Its circumstances, challenges and promises are always unexpected.

Mary Magdalene goes to the tomb early in the day, while it is still dark. She goes to anoint a corpse. But the tomb is empty, the stone rolled away. The resurrection has already happened.

The first message of Easter is this: he’s not here! You just weren’t early enough.

She fetches the men, who are not much use. And quite used to being late. One of them seems to know what has happened, but he keeps it to himself. The other won’t stop running about. You know how men can be.

Weeping, Mary lingers at the tomb. Sensing a presence with her, she turns and sees someone she presumes to be the Gardener. ‘Why are you weeping?’ he asks her. ‘For whom are you looking?’

It’s a stupid question. It’s obvious what she’s looking for. The body of Jesus. But she’s too late. Someone has taken him away. Does the Gardener know what they’ve done with it?

It’s the most profound question in the world. Who are you looking for? I mean, what are you really looking for? What is it that you seek? Whom will you follow? How will you set the compass of your life?

And then he speaks her name. For a moment she’s on time. That tender moment where time and eternity fuse together in the moment of recognition. Her eyes are opened - there - in the dawning of a new day and a whole new humanity. A spring of hope for the world that will never run dry; a love that can never be too late. Jesus: the early bird, the song thrush singing before the dawn; the pelican who feeds her young with her own shed blood; the crucified one who took upon him our flesh and plumbed the depths of grief, has been raised up. And all of God was with him in his dying. And all of us are with him in his rising.

But she’s too early again. It is not yet that day when we are with God in paradise. There is work to be done. This new thing that you are seeing. It is for everyone. It must be shared.

Gently, he prises her hands away. ‘Do not cling to me. I have not yet ascended… but go to my brothers and say to them, I am ascending to my Father and your Father to my God and your God.’

She thought he was the Gardener. She was right. He is the gardener: the new Adam tending a new creation, re-planting the seeds of human destiny.

And now we fast forward. Evening on the first Easter day and two people getting out of Jerusalem, maybe worried that what happened to Jesus might happen to them. They, too, are just in time. Or so they think. But the Jesus they are getting away from is also the ‘as yet unrecognised’ stranger alongside them.

He listens to their fears. He gently chides their foolishness. He opens up the Scriptures in ways they had never seen before. And, while breaking bread, their eyes are opened too.

Then, that very hour, they rush back to Jerusalem. Hopefully, they won’t be too late. They have to share with the others the incredible things they’ve seen and heard and how it burns within their hearts.

But they’re not in time. Not late. Just not quite early enough. Jesus is there already, smiling and welcoming people in and building from the whole scattered, wretched, broken and sorry humanity a new people and a new community: one where we are each known by name; and one where there is, for each, a place prepared. One, where despite the fact that we’re never quite early enough, and that God always seems to be offering more, dancing ahead of us just when we think we’ve got it worked out, we’re never too late.

God’s door is always open. The kettle is always on. The beers are in the fridge. The champagne on ice. And someone has been sent out with a very large order for curry. God is scanning the horizon for our return.

Sisters and brothers, Easter has come a bit early this year. It always does. In Jesus Christ, God has already done everything that’s necessary for us to enjoy eternal life with him. It’s an absolute done deal. The table is laid. There’s nothing you can do to earn it or deserve it. The invitation has your name on it, and however late you show up, the unconditional welcome is just the same.

Oh, how our world needs this message of joy as we start to start again. Let’s live it and share it this Easter. Before it’s too late.

You can watch all of the service below

Order of Service Easter Day at 11am 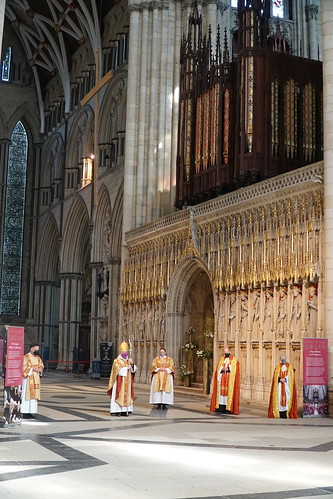