A farewell to Bishop Alastair Redfern

The Archbishop of York delivers a short speech at General Synod ahead of the retirement of the Bishop of Derby, The Rt Revd Dr Alastair Redfern. The speech follows in full:

Bishop Alastair, I suspect you are feeling a little uncomfortable waiting for this farewell.  Not because there are some dark secrets that Caroline might have shared with us but rather because you are a very private person and won’t relish me talking about you and for all of us wanting to say a very big thank you for all you have given.

However, it is quite right that we are given the opportunity to say thank you to a faithful disciple, a committed learner and teacher and a thoughtful and caring Bishop who has given of himself to others throughout his ministry.

There are many stories to tell from your ministry in various places and anyone who has been a tutor at a theological college must be in fear and trembling of all the nuggets of information your previous students might want to share about you.  But don’t worry we wouldn’t do anything like that to you Alastair.

Now, there are those who suggest you may not be the most modern of people but as this photograph shows this is simply not true! 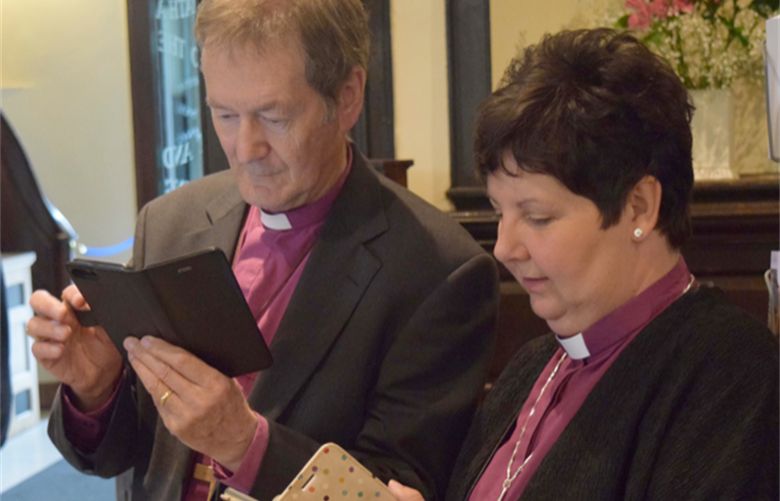 Pictured here clearly enjoying a game of Angry Birds or was it Candy Crush, with your episcopal colleague.  It might be worth pondering who is teaching whom in this enterprise!

But on a more serious note, this picture captures something of the teacher, pastor and bishop you are Alastair. 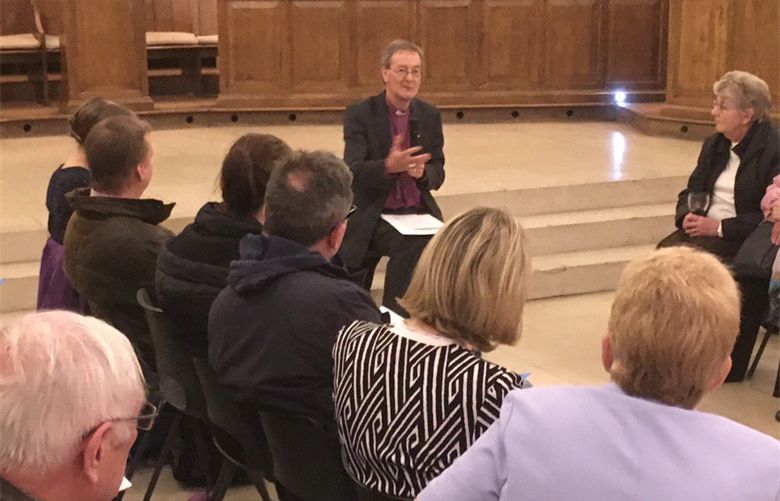 One of your Area Deans commented that you encourage and support the clergy “quietly and without fuss”.

You have encouraged the clergy and laity to continue their learning with regular quiet days, study days, an annual summer school and an annual clergy conference, all of which I know have been hugely appreciated.

Alastair, you have overseen the development of new ‘super deaneries’ in the diocese where the area deans are paid half-time in that role (with the other half of the stipend for their parish ministry). I understand it has been a joy to see the eight area deans grow into their leadership roles and plan mission and ministry locally and contextually.  Is this perhaps a new model for the Church of England?

You are a passionate supporter of church schools and in September, the new Derby Cathedral School will open - the first secondary church school in the Diocese. You have spoken time and time again of the mission opportunities our church schools afford and have built up a first-rate team under an outstanding Director of Education.

Of course, Alastair we are all impressed with the work you have done to highlight the horror that is modern slavery and the huge amount of effort you have given to leading on this area not only for the Church of England but for all denominations to ensure this matter is taken seriously.

Alastair founded the Clewer Initiative, a national project linked to the Church of England, working with dioceses to tackle modern slavery.  He speaks regularly at conferences about slavery and has produced related theological resources including a Lent course, and a book – ‘The Clewer Initiative: T.T. Carter and The Fight Against Modern Slavery’.

As a member of the House of Lords, Alastair was on the Select Committee that scrutinised the draft Modern Slavery Bill and worked exceptionally hard to take it through Parliament for enactment in 2015. This was only the second piece of anti-slavery legislation in British history since 1807 and the first in Europe.

Alastair has also found time to be the:

Sitting next to Alastair is Caroline, his wife and we all know of her work and commitment to the life of the church.  She has been a great support to Alastair or rather I ought to say they support each other in all they do.

Alastair, we know that you won’t really retire. But we want to thank you for all you’ve done over the years. Your vast wisdom and deep spiritual leadership will be greatly missed both in the Diocese and in the life of the national church.

Thank you and God Bless you richly.