The Archbishop and Mrs Margaret Sentamu gave a presentation under Standing Order item 107 at General Synod on Climate Change. This follows their visit to churches and communities in Samoa ,Tonga and Fiji earlier this year.  The address follows:

In July and August of this year, Margaret and I had the privilege of visiting for three weeks the diocese of Polynesia Fiji, Tonga and Samoa at the invitation of Archbishop Winston Halapua and his wife the Revd Susan Halapua.

MS: It was the most hectic three weeks I had experienced for a while, with a packed programme. We met the Head of State of Samoa, the President of Fiji, and the Deputy Prime minister and members of the Tongan Royal family, where we were very warmly received.  We turned the sod for a new Anglican primary school and blessed an international airport extension.  We soon became adept at saying the greetings and salutations in three different languages:

Vinaka Vakelevu  - Thank you very much – in Fijian

In all the three countries we visited, addressed ecumenical and interfaith leaders, members of civic society, government and diplomats from various countries within the three Pacific nations and beyond. Topics ranged from climate change, HIV/Aids, poverty and unemployment.

MS: We had the honour of visiting Poutasi village, one of the many villages in Samoa which suffered devastation by the Tsunami in 2009 where the Archbishop was bestowed with the highest chiefly title of To’osvili meaning ‘he who steadies the boat’ by the paramount chief whose wife died in the tsunami; he survived.   As a new chief of Poutasi, the Archbishop got to wear a special head dress and yet another skirt – but this time a much longer one than the sulu (national dress for men) which he is wearing now.  This was followed by the Ava ceremony and another big feast to celebrate this historic event.  I came away not only with an expanded waistline but boasting of being married to a Samoan high chief.

The Moana/Oceanic Eucharist held on Pangaimotu Island of Tonga and broadcast live on radio and television said it all. In order to get to the Island in time for the Eucharist we woke up at 4 am and were transported across to the Island in small boats.  The students of St. Andrew’s High School dramatized the Moana Prayer: that climate change be addressed.

To be on an island which once upon a time had everything, but is now barren, because of human activity thousands of miles away due to pollution by the developed nations, was a sobering experience.

In the midst of this devastation we celebrated the power of God’s love and grace.  At the end of the Eucharist, in response to the Gospel of love, worshippers planted seedlings of mangroves as a sign of hope and new life for the future. The Deputy Prime Minister spoke of the importance of the Church and Government working together in caring for the environment.

The question is will the international pledges we’ve heard so far save island countries such as Fiji, Samoa and Tonga and the other 33 smaller islands in the South Pacific, now feeling the most dire effects of climate change?

Two school children in Fiji spoke about a waterlogged cemetery.  They said:

“The shoreline extended more than 150 meters out towards the open sea until 1995 when the sea level started rising, covering everything in its path and causing families to move inland.  A cemetery, which is now part of the ocean, is evidence of sea level rise.  All the graves now lie submerged in the ocean at high tide and at low tide they are exposed all topsy-turvy and covered in barnacles.”

The Pacific island republic of Kiribati, off the coast of Fiji, is already planning for the relocation of its entire population as its sea levels continue to rise.

In all my Lectures and reflections on Climate Change and Leadership, I stressed the importance of having the right leadership in place, that would give voice to the challenges facing the peoples of the South Pacific.

The Deputy British High Commissioner in Suva invited diplomats from the Pacific and beyond, together with UN representatives, leaders of religious communities, including members of the Fiji Conference of Churches, senior civil servants and academics and other community leaders, to discuss the pressing issues of climate change in the Pacific region and globally.

MS: Although Archbishop Halapua and his wife Sue said we had been a great blessing to the Diocese of Polynesia and the wider communities in Ocenia, we came away feeling more blessed for the way the people took us into their hearts and made us feel one in Christ with them.

In keeping with their motto: “In Christ, we in our Koro (boat/vessel) move together… We have work to do”.

The Head of State of Samoa, (Tui Auta Tupua Tamasese, Ta isi Efi,) who is also an academic and scholar on the subject of Climate change, in his address to the University of Hawaii, said these words;

“Fundamentally the problem of climate change is a problem of arrogance and greed. If we want to address seriously the critical issues that face our world today we have to come up with something that is bold enough to allow us to say the unsayable. In other words, what is constructive in this search for answers is also what is most hard to say.

Arrogance is the condition of presuming unfettered dominion over our environment and all living things. It is the ability to rationalise and believe that what is wrong is right.”

MS: “Greed is the unhealthy preoccupation we have with profit”, i.e. the accumulation of pecuniary or material gain for individual benefit at the unreasonable expense of others. Modern technology, industrialisation and mercantilism have allowed us to live a life of comfort literally at our fingertip. But this has come at a cost to our natural environment and spiritual health.

The dialogue on climate change is therefore not easy. Not just for the technicalities of understanding atmospheric changes and rising sea levels but equally, if not more so, for the soul-searching questions it forces us to confront about ourselves and our pursuits of wealth…”

MS:  “This is why the ava or kava ceremony is not only about welcoming and showing kindness to guests but it is about honouring the genealogical connections between people, God and all of nature by drinking from the one cup.  At this ceremony a prayer is said before drinking and either while raising one’s ava cup towards heaven where God resides, or while pouring the ava liquid onto the ground in a gesture of connection with the earth.  The prayer gives thanks to God and seeks blessings for a successful gathering or meeting.”

Therefore, concern for the planet is not a Christian ‘add-on’, but intrinsic to our understanding of the Gospel today.  The affirmation we make when reciting the Creed – ‘God the Father, Almighty, Creator of heaven and Earth’ - is foundational for the gospel of Jesus Christ our Lord.

As the psalmist put it, ‘The earth is the Lord’s’ (Psalm 24:1); all we have – life and the means of life – comes to us as a gift of God’s love. Care for God’s creation is an essential and vitally important dimension of our Christian discipleship and mission in response to God’s love, in Jesus Christ.

So, as Christians, the world over, and as Anglicans in England, we ought to be leading players in debates and in taking action about climate change.  Because what ultimately matters is not scientific knowledge, or technology, or a change to our economic system – vitally important though all these are.  What matters is how we see ourselves in God’s world, how we as human beings relate to the rest of God’s creation, on which our life depends.

Vinaka Vakalevu  - Thank you very much for listening to us. 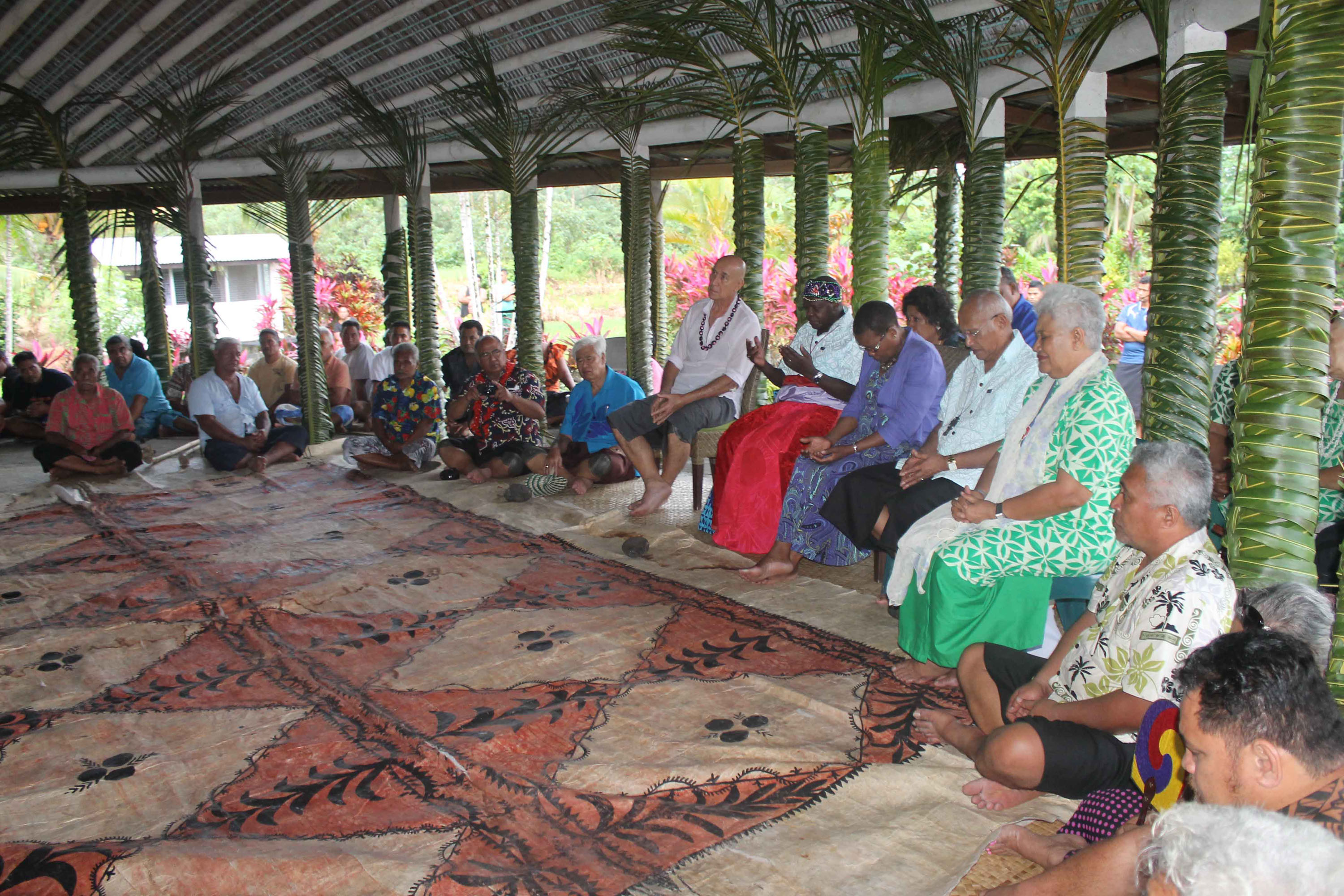